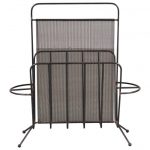 Beautiful magazine holder by Mathieu Matégot, manufacutred by Artimeta in the Netherlands around 1950.

It is made of high quality black perforated metal, making it an eye-catching and very recognizable Matégot piece that would make a great addition to any modern interior.

Mathieu Matégot (1910-2001) was a Hungarian and French designer and material artist. He was one of the most renowned French designers of the 1950s. Born and educated in Budapest, he moved to France in the early 1930s, where he worked as a window dresser and women’s clothing designer. He learned metalworking techniques as a prisoner of war in the 1940s, and upon his release began designing furniture, pioneering many of what we now identify as Midcentury design tropes, like metal-mounted rattan, steel tubing, and perforated sheet metal. By the 1970s, Matégot returned to producing tapestries.