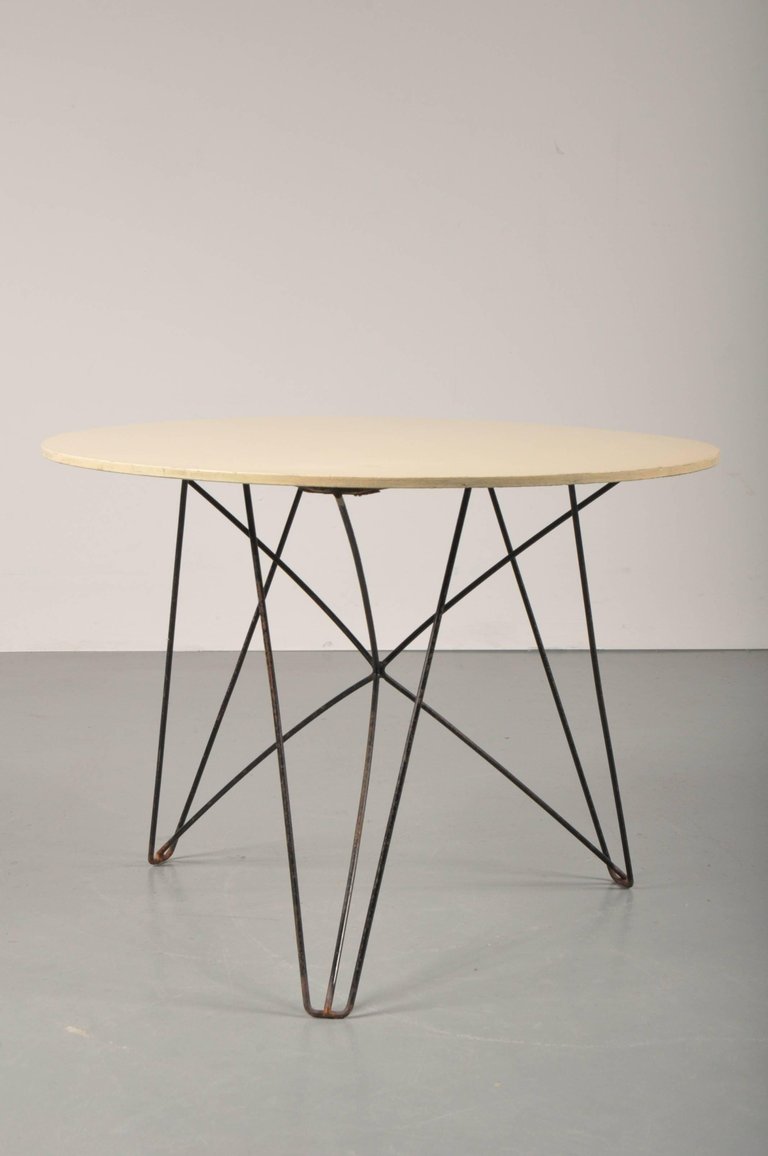 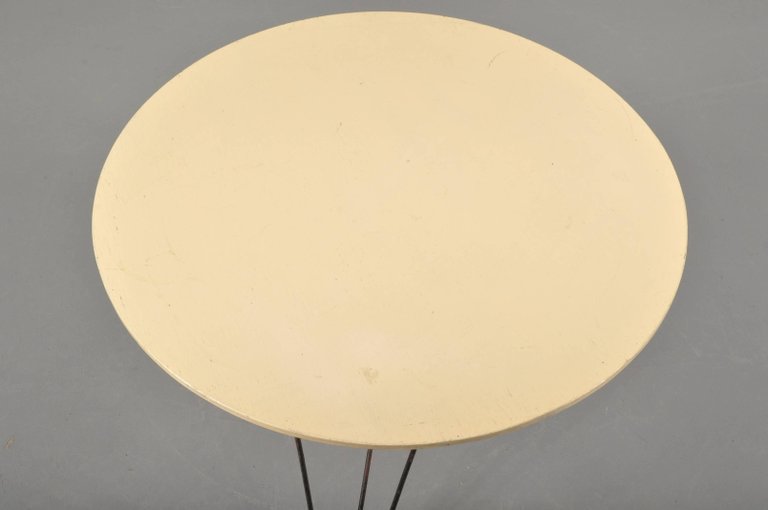 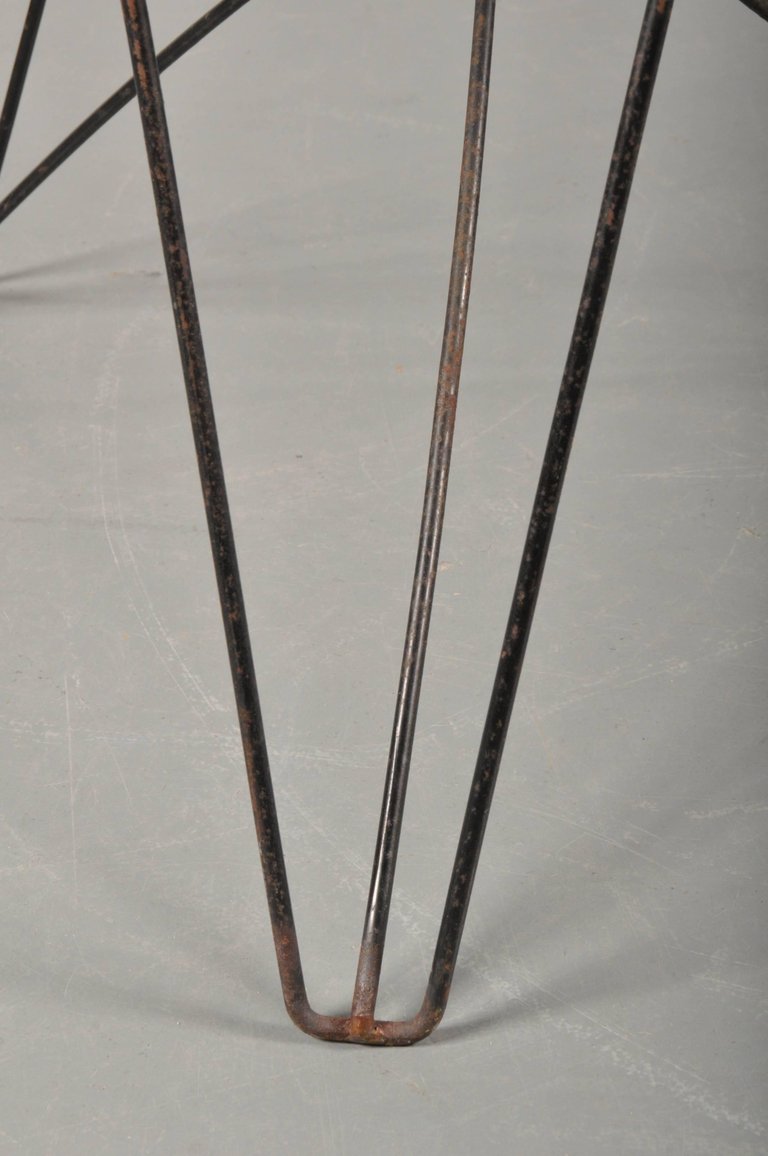 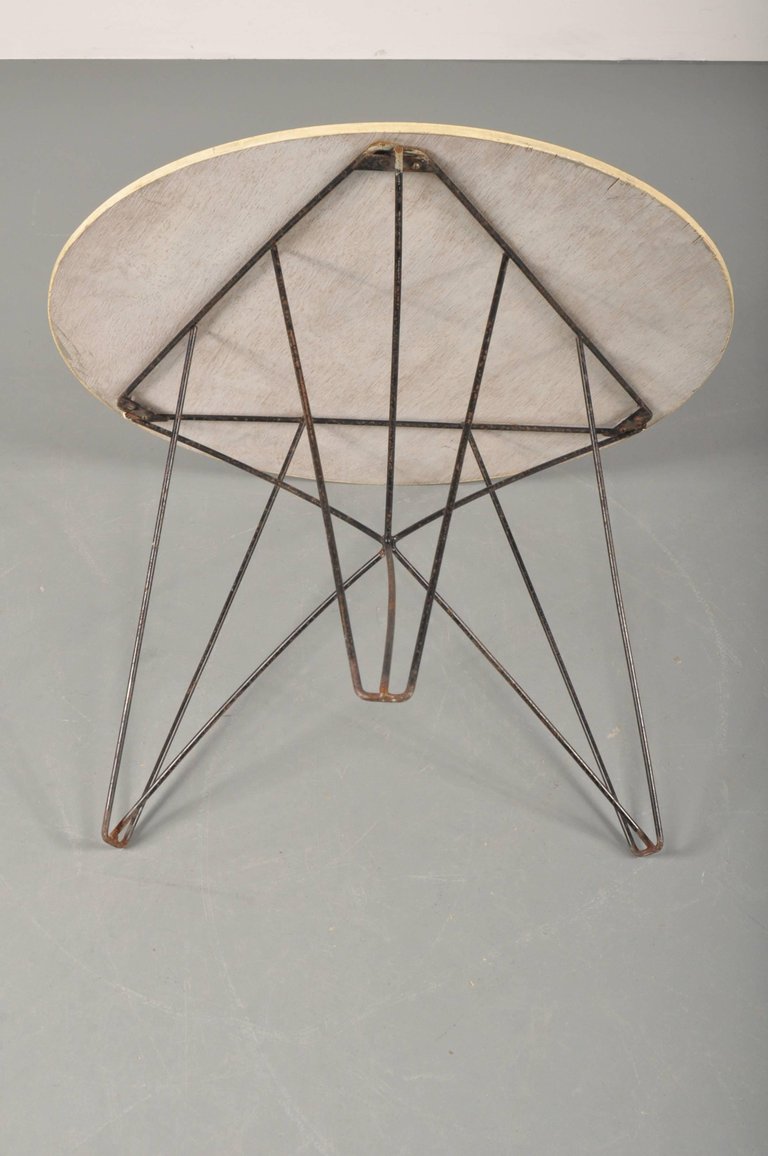 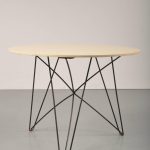 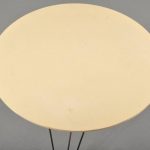 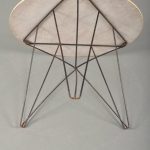 An eye-catching and important coffee table, model “IJhorst”, designed by Constant Nieuwenhuijs, manufactured by ‘t Spectrum in the Netherlands in 1953.

This iconic table is made of high quality black lacquered metal with a cream white painted wooden top. The structure of the base is very well made, being the feature that makes this table truly Stand out! It could be used as a coffee table or side table, adding a unique touch of Dutch design to the interior. Because this is a rare design by famous Dutch artist Constant Nieuwenhuijs, this table is not only beautiful, but also a true piece of (design) history by the founding member of the CoBrA art group.

It remains in good original condition with minor wear consistent with age and use, preserving a wonderful vintage patina.

About the designer:
Constant Nieuwenhuijs -better known as Constant- was a founding member of the art group CoBrA. He was a Dutch painter, sculptor, graphic artist, author and musician.
Constant was born in Amsterdam on 21 July 1920 as the first son of Pieter Nieuwenhuijs and Maria Cornelissen. Their second son Jan Nieuwenhuys was born a year later. Both sons became artists although their parents had no apparent interest in art. As a young child Constant drew passionately and showed great talent. He read literature with a special preference for poetry and played musical instruments. Constant painted his first oil painting, De Emmaüsgangers, at age sixteen. It depicted the Revelation of Jesus to two of his followers in Emmaus. With no money to buy materials he painted this painting on a jute sugar bag with pigments he had bought from a house painterMany of Constant’s early drawings and paintings are religiously inspired, due to his Jesuit schooling. Yet at the age of twenty Constant turned his back on Catholicism. In 1946 Constant traveled to Paris for the first time where he met the young Danish painter Asger Jorn. The friendship between Jorn and Constant later formed the basis for CoBrA. July 1948 Constant founded Reflex Experimentele Groep in Holland (nl) with Corneille, Karel Appel and his brother Jan Nieuwenhuys. The first edition of the magazine Reflex was published with a manifesto written by Constant. For Constant art had to be experimental. He had deducted this from the French word ‘expérience’ and believe that art springs from experience of the artist and is continuously changing.
This manifesto would become one of the most important texts on art in the Netherlands after WWII. In this manifesto he states that firstly the process of creation is more important to the experimental artist than the work itself. It is a means to reach spiritual and mental enrichment. Secondly the work of experimental artists is a mirror image of changes in the general perception of beauty.
Constant, Corneille and Appel, three totally different characters and artists, were united in their quest for innovation. They exhibited their work together and were often seen together in the European art scene. This was somewhat to the annoyance of other experimental artists in the Netherlands. The wanderlust of the three is especially notorious.
Constant died on 1 August 2005 and was survived by his son and his three daughters, and by his widow and her daughter. he director of the Stedelijk Museum Amsterdam (Municipal Museum of Amsterdam), Willem Sandberg, was very supportive of young artists and fully supported the CoBrA group by giving them seven large rooms to exhibit their work in. Most of the CoBrA works had been fairly small due to their lack of money and so Sandberg gave the artists an advance to create some larger works in the week before the exhibition. Constant, Corneille, Appel and Eugène Brands created several large pieces of art that have become iconic for the movement. The architect Aldo van Eyck was commissioned to shape the exhibition. The exhibition was unconventional to say the least. The works of art as well as the way they were presented give rise to harsh critique from press and public. A critic from Het Vrije Volk (Free People) wrote, ‘Geklad, geklets en geklodder in het Stedelijk Museum’ (Smirch, twaddle and mess in the Urban Museum of Amsterdam). An often heard remark from the public was that their children could probably do the same, only better. The CoBrA artists were considered scribblers and con artists.
After CoBrA Constant’s work became more abstract. Back in Amsterdam in the summer of 1952 he developed an interest in spatial architecture and three-dimensional works. With Aldo van Eyck, whom he met during his CoBrA time, he created a space for the exhibition ‘Man and House’ at the Urban Museum Amsterdam from 1952-1953. In 1954 he worked on a project with Gerrit Rietveld. Together they created a model house for warehouses De Bijenkorf.
Back in Amsterdam after his stay in London, Constant started to focus mainly on architecture and the urban environment. The focal point of his work was finding out what potential added value art can provide in intensifying daily life, in which there is room for creative expression. He abandoned painting to work solely on his New Babylon project from 1956-1974.
With New Babylon Constant envisioned a “world wide city for the future” where land is owned collectively, work is fully automated and the need to work replaced with a nomadic life of creative play. New Babylon is inhabited by homo ludens, who, freed from labor, will not have to make art, for he can be creative in the daily practice of his life.
The project of New Babylon only intends to give the minimum conditions for a behaviour that must remain as free as possible. Any restriction of the freedom of movement, any limitation with regard to the creation of mood and atmosphere, has to be avoided. Everything has to remain possible, all is to happen, the environment has to be created by the activity of life, and not inversely. According to the Dutch architect Rem Koolhaas, Constant has made a lot of architects think with his New Babylon: “He was an example of courage”.