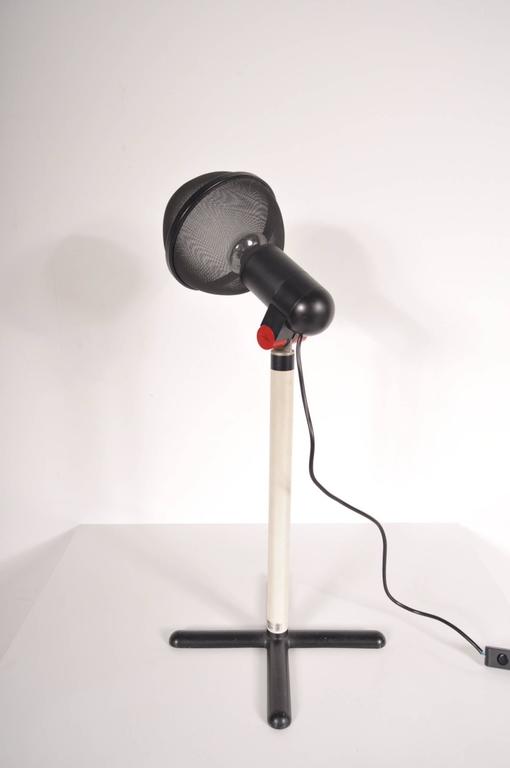 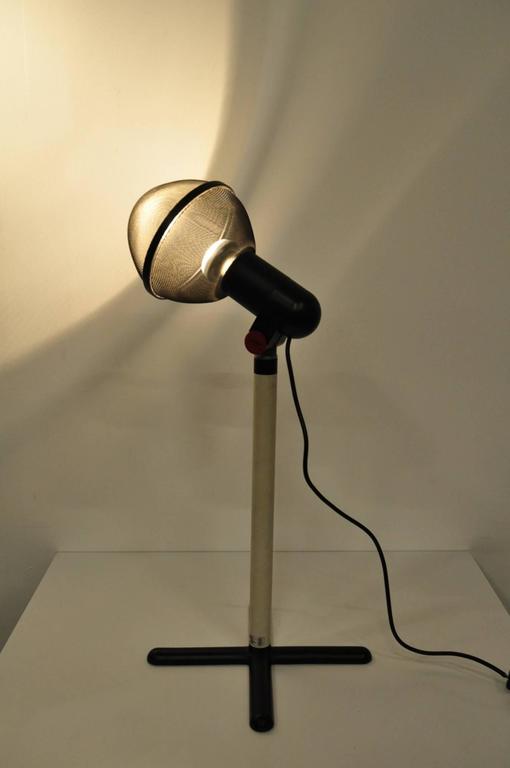 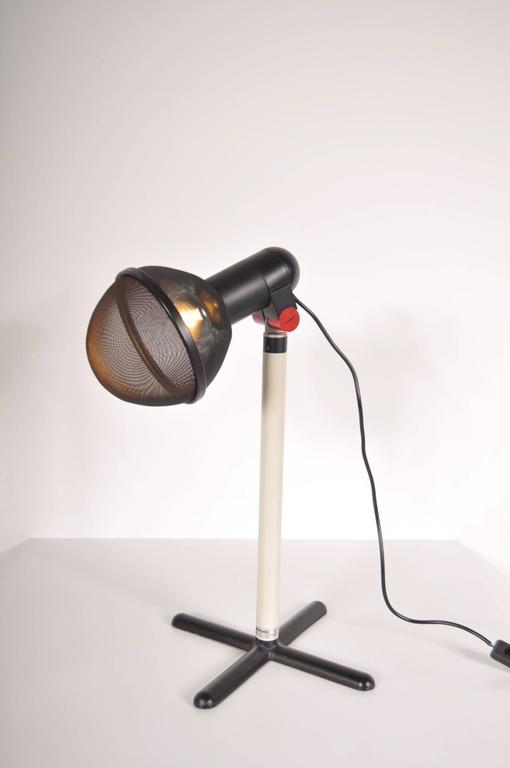 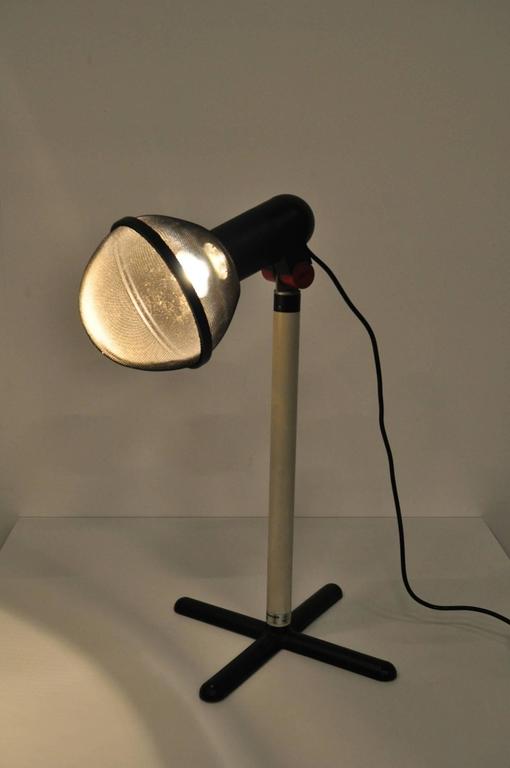 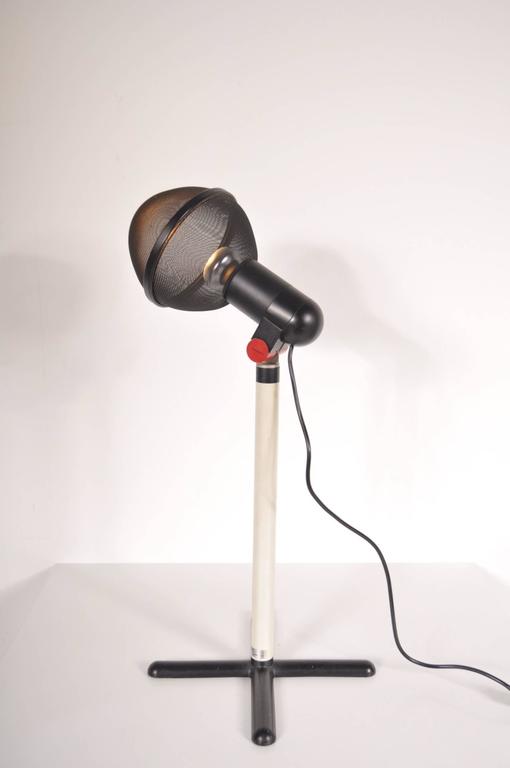 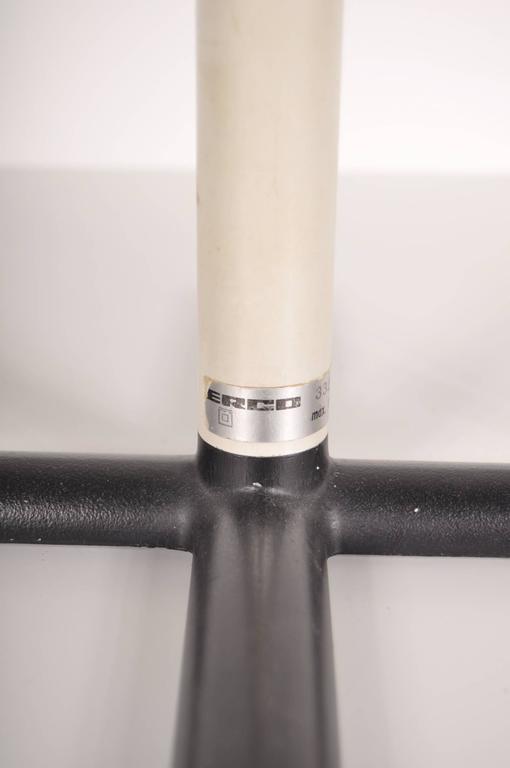 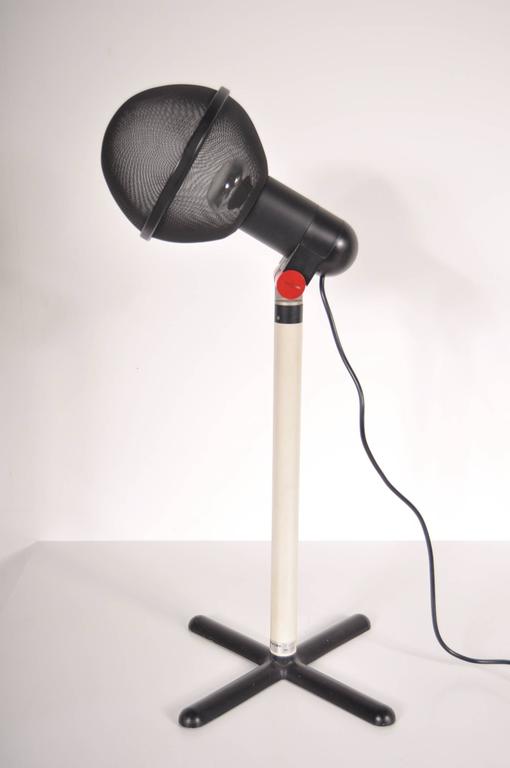 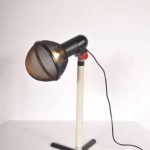 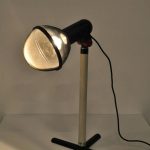 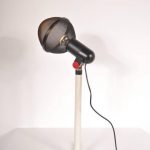 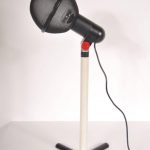 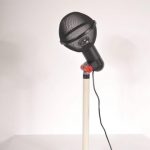 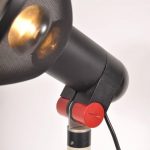 This eye-catching lamp is shaped like a microphone. It is made from black and white metal with red details, a nice contrast that really draws the attention. The hood of the lamp is made from the same perforated material as used in microphones. This creates a very nice effect, especially when lit.

In good original condition with minor wear consistent with age and use, preserving a very nice patina. Roger Tallon (9 March 1929 – 20 October 2011) was a French industrial designer. After studying as an engineer (1944–1950), Tallon was employed by Caterpillar France and DuPont. In 1953, he joined Technès, the technical and aesthetic studies office founded in 1949 by the father of industrial aesthetics Jacques Viénot, and Jean Parthenay. Being rapidly promoted to technical and artistic director at the agency, he became the sole director after Viénot’s death in 1959.
In 1957 he enrolled at the École des Arts Appliqués (“School of Applied Arts”) in Paris, and put in place the first design course in the country. In 1963, he set up the Design Department of the École nationale supérieure des arts décoratifs in Paris. As a consultant for the US company General Electric, Tallon designed refrigerators and washing machines and set up the Design Department of the American company. In 1966, the Téléavia P111 portable television was put on the market against the advice of the Board. It broke the mould of TV design and was a great commercial success with a cult following.
In 1973, Tallon set up the agency Design Programmes. Brother-in-arms with the LIP watchmakers, he created the Mach 2000 brand of watches and chronometers. In 1974, with Jean-Charles de Castelbajac, he created a concept aircraft cabin for Air France.
After leaving Euro RSCG, he continued to work independently. Roger Tallon died on 20 October 2011 after a long period of sickness. Tallon and his team created hundreds of products, including industrial robots for Peugeot, the apparently purposeless 8mm film camera “Veronic”, the Gallic 16 and 14 lathes for the Belgian company La Mondiale – a quantum leap in machine tooling –, airport vehicles, forklifts for Fenwick, graphic images for Fenwick Aviation, and a slide projector for Kodak.
In the art world, Tallon worked with Yves Klein, César Baldaccini, Arman, and was contacted by Catherine Millet, founder of the art press review, to create a brand that has hardly changed to this day.
Tallon became a household name in areas including tableware, furniture, interior design, reflector lamps for the German Erco, watches for Lip, ski boots for Salomon Group, toothbrushes for Fluocaril, oilcans for Elf, and so on.