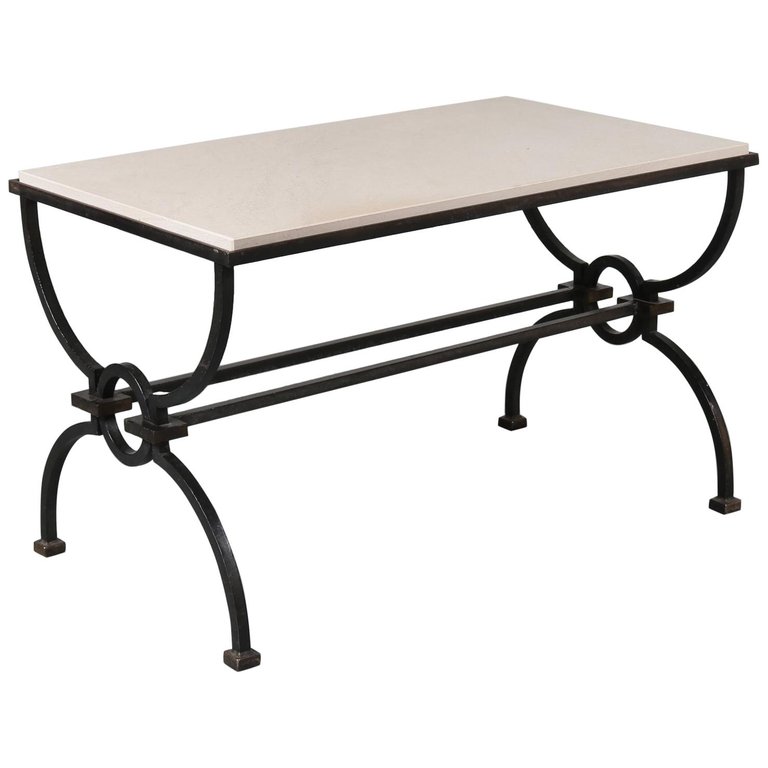 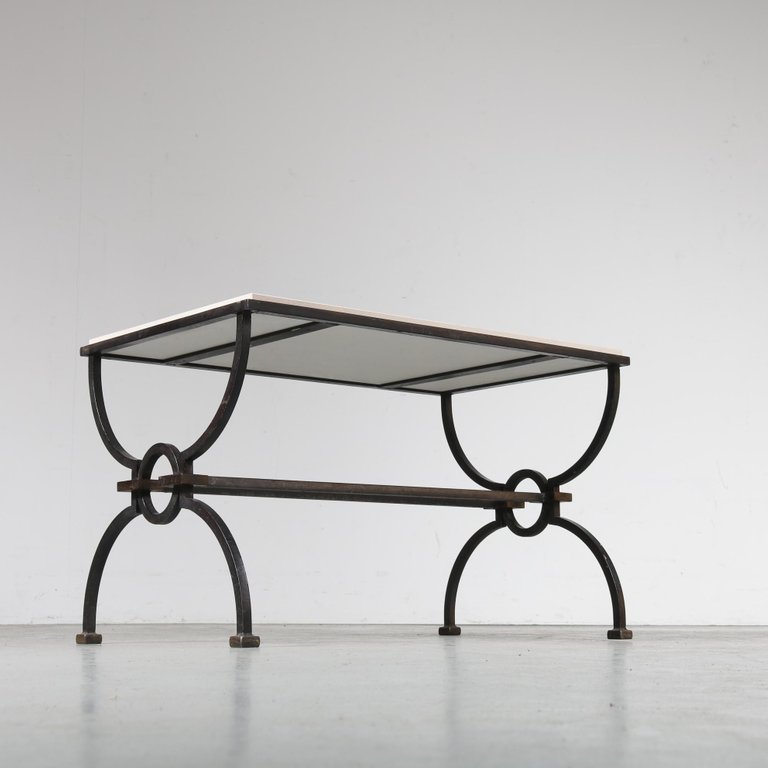 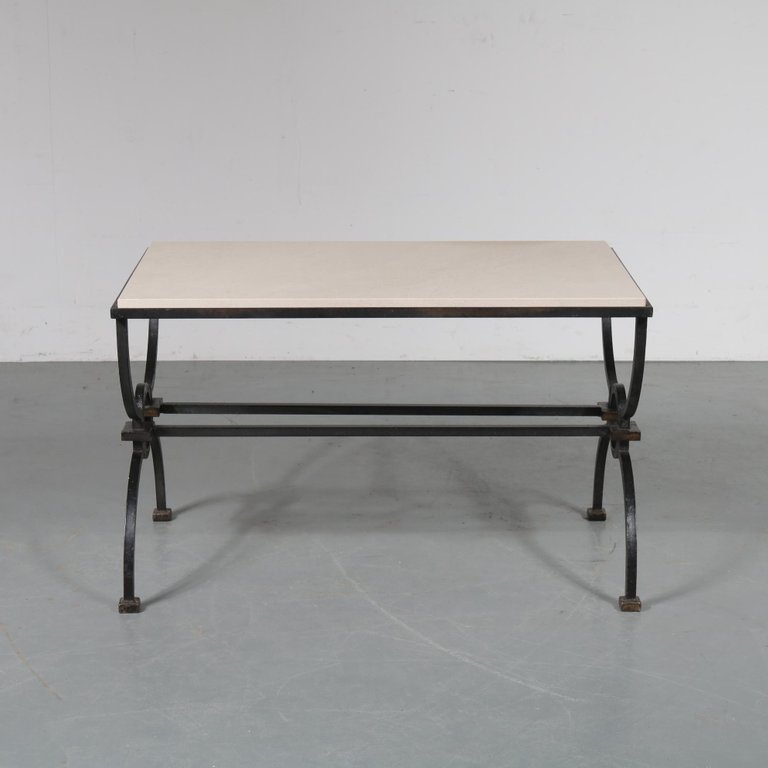 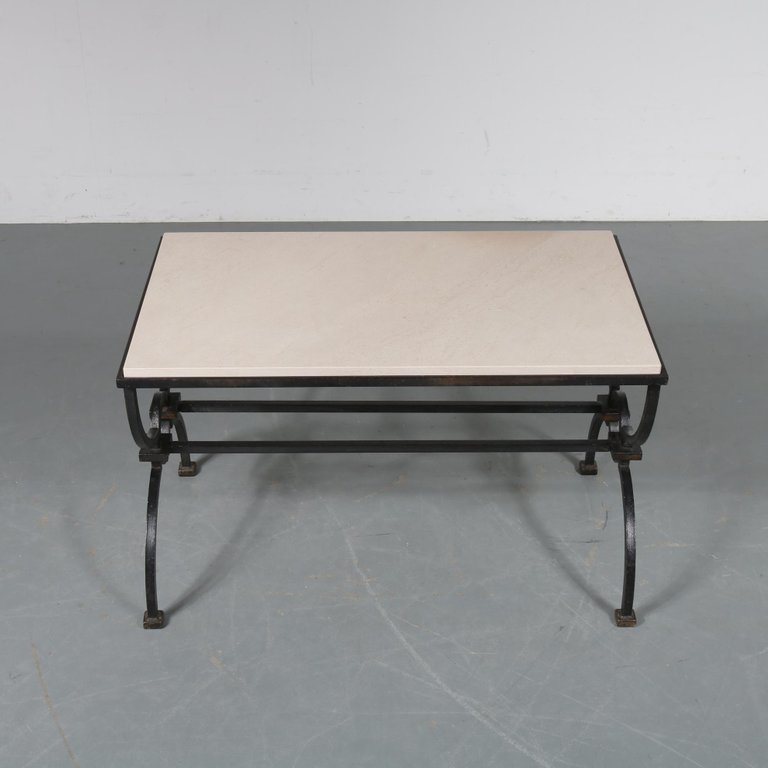 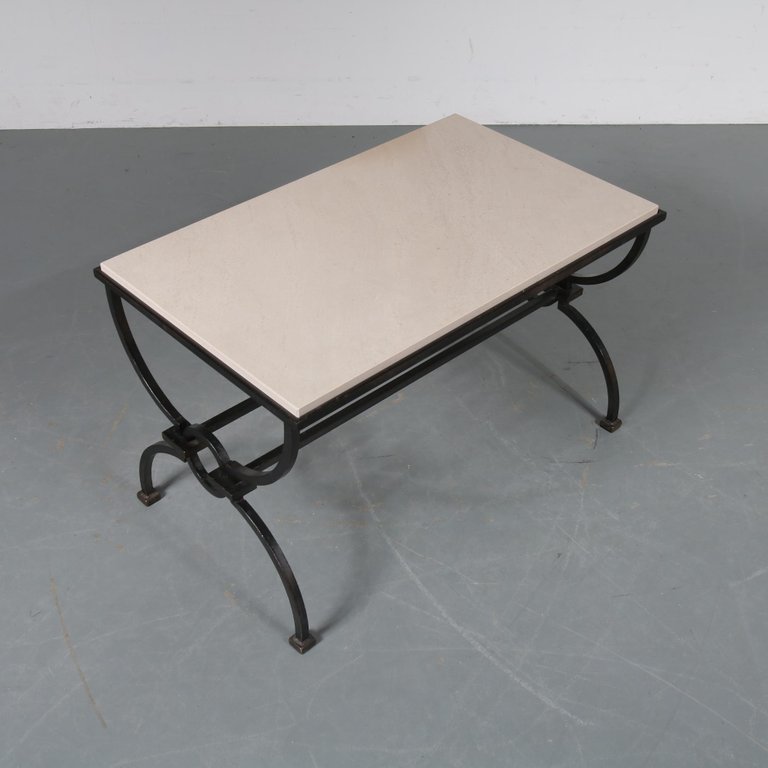 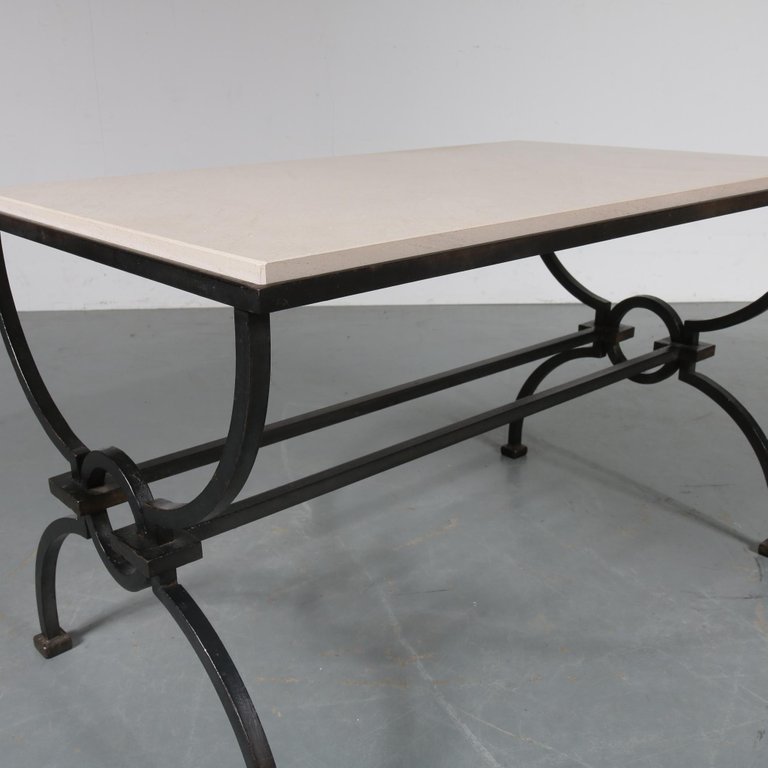 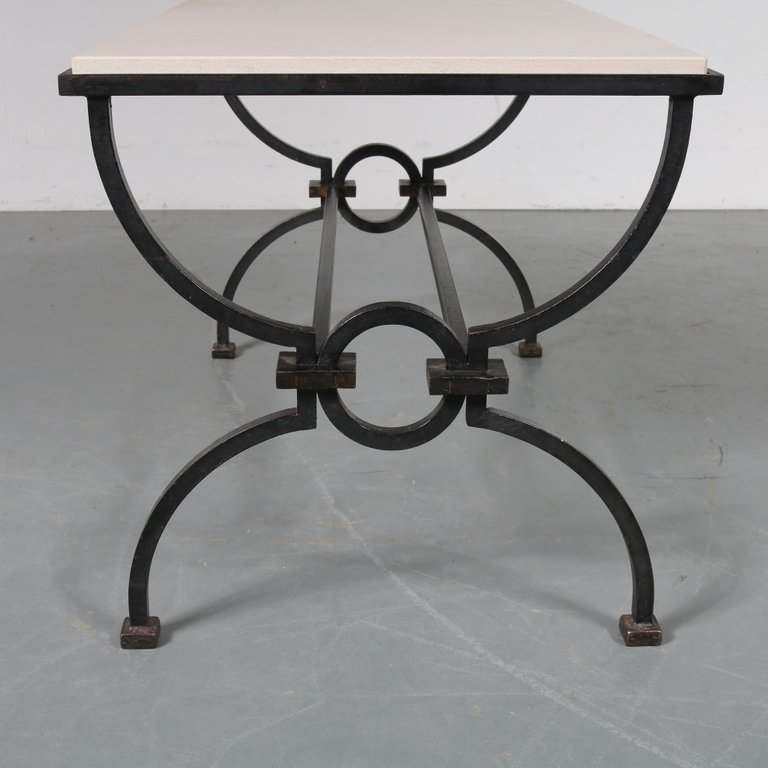 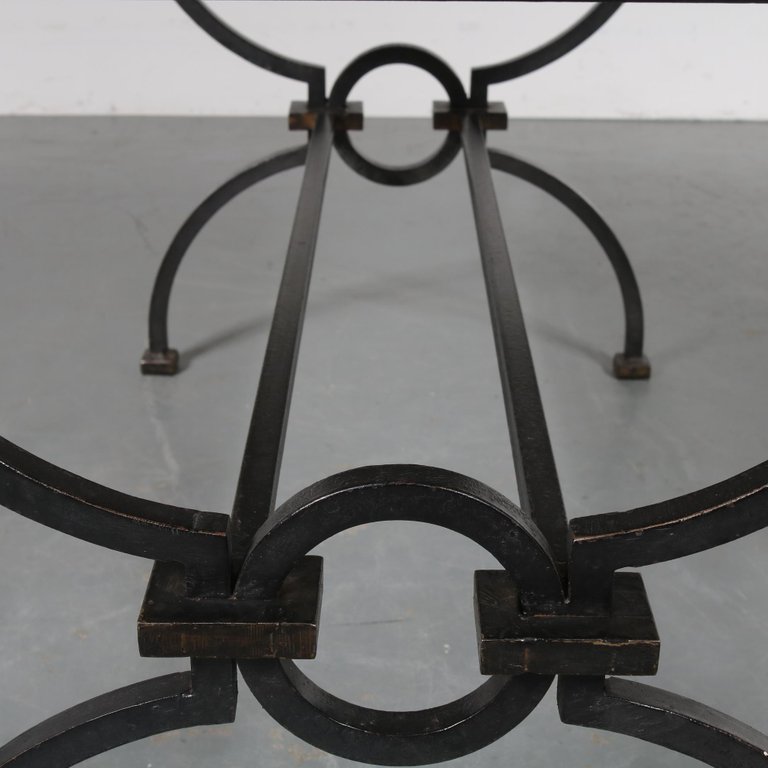 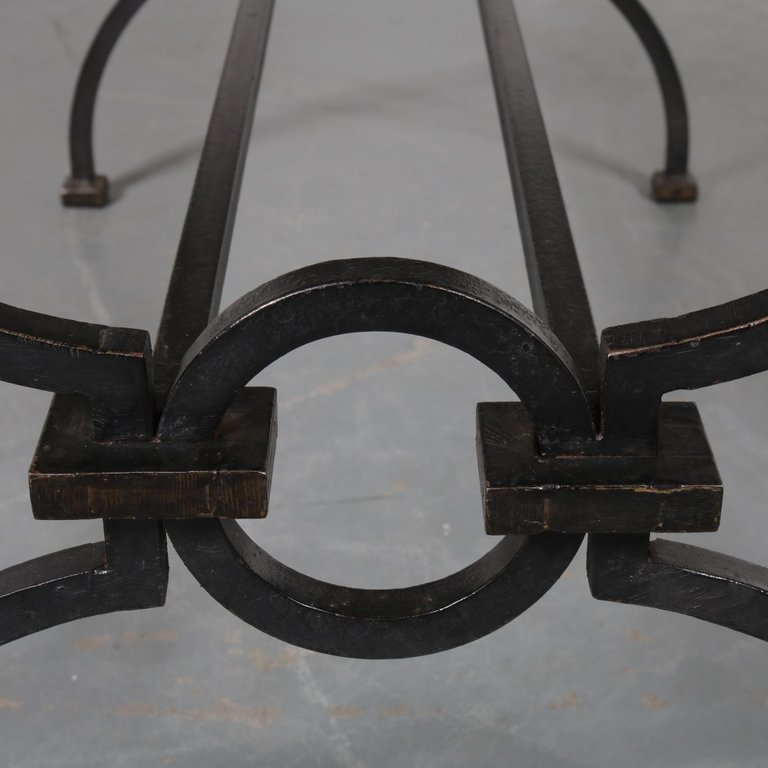 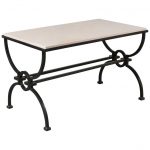 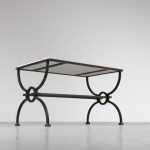 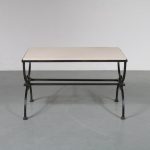 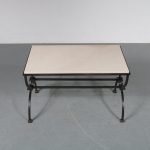 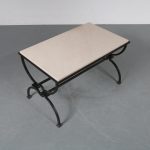 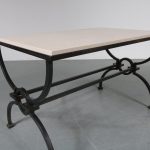 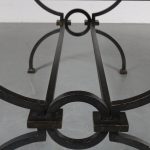 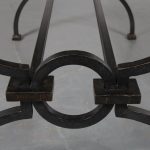 This beautiful Art Deco piece is made of high quality metal with a lovely curved shape and straight support bars. The use of shapes creates a wonderful, luxurious appearance. The frame has a black color, contrasting nicely to the white / cream colored stone top. This is an iconic piece of French modernism design that will add a touch of elegance to any decor!

The table comes from a private collection in Bruxelles, Belgium and is a truly unique find.

orn in 1902, Gilbert Poillerat was recognised as a master of ironwork during his lifetime. He collaborated with the most famous designers of the time such as André Arbus, Jacques Adnet and Jean Royère, and by the end of the Art Deco period he was creating unique and limited edition pieces commissioned by private collectors and public institutions, working notably for the Mobilier National.
Having graduated from the Ecole Boulle in 1921, he went on to work as a designer and model maker for Edgar Brandt, a renowned ironworker who worked in construction and weaponry, and who created the flame under the Arc de Triomphe.
Poillerat’s work expresses his love of design and of hard metal. Throughout his career his ironwork reflected the changing tastes and fashions of the times. From 1931, Poillerat’s designs became simpler and more suggestive of 18th century neoclassical forms. The oniric style he developed evokes the Ecole de Fontainebleau and the slightly surreal preciosity made fashionable by certain designers at that time. Details such as entwined cords are typical features of his work during this period.

Jacques Adnet (April 20, 1900 – October 29, 1984) was a French Art Deco modernist designer, architect and interior designer. An icon of luxurious French Modernism. He attended the Municipal School of Design in Auxerre and the École des Beaux-Arts Paris.
He believed in the functional aspect of furniture combined with geometrical simplicity. Jacques Adnet was inspired by pre-classical styles and was well acquainted with traditional furniture. Until the age of 28, Jacques lived and worked hand in hand with his twin brother Jean at the Studio La Maitrise, where they met the Art Déco designer Maurice Dufrene. From 1928 to 1960, he directed La Compagnie des Arts Francais. His team of decorators included Francois Jourdain, Charlotte Perriand and Georges Jouve. Adnet presided over the Salon des Artistes Decorateurs from 1947 to 1949. During the 1950s, he created furniture and concentrated on the numerous commissions he received, such as the decoration of the private apartments of the President at the Elysée Palace or the meeting room of the UNESCO headquarters in Paris. In 1959 he became the director of École nationale supérieure des arts décoratifs in Paris until 1970.