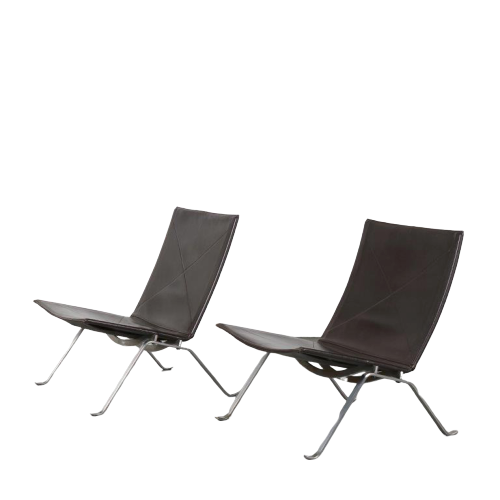 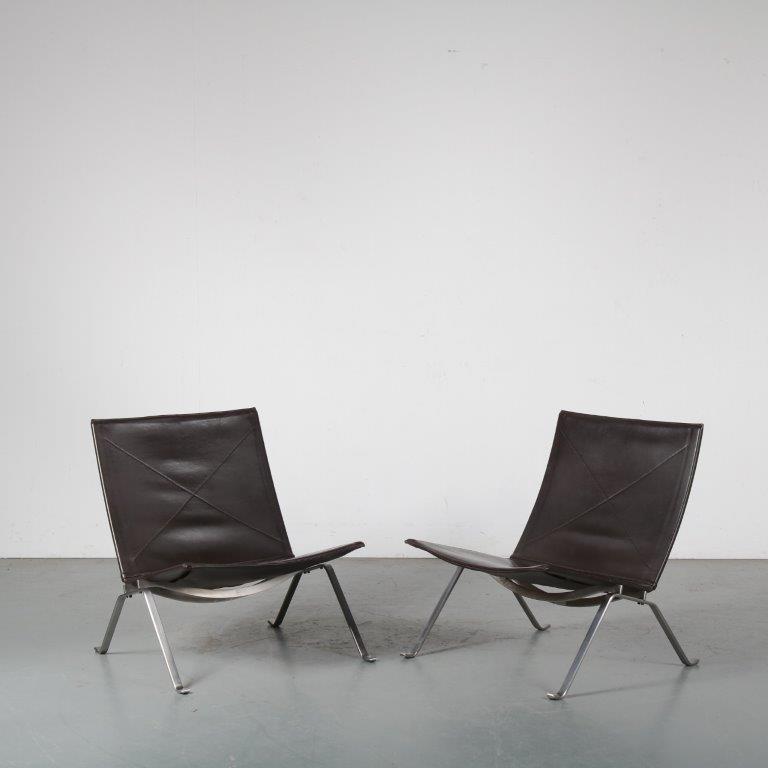 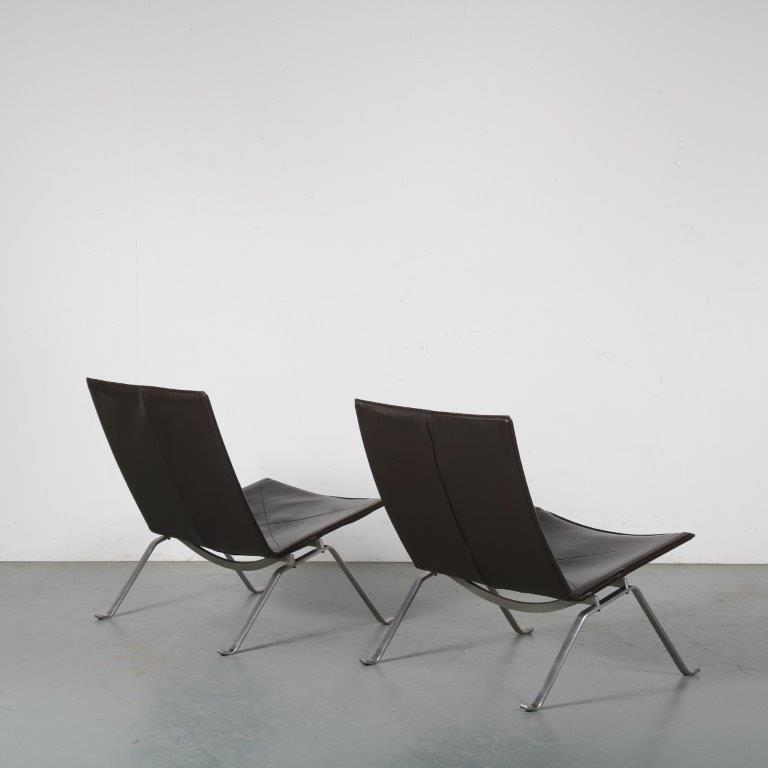 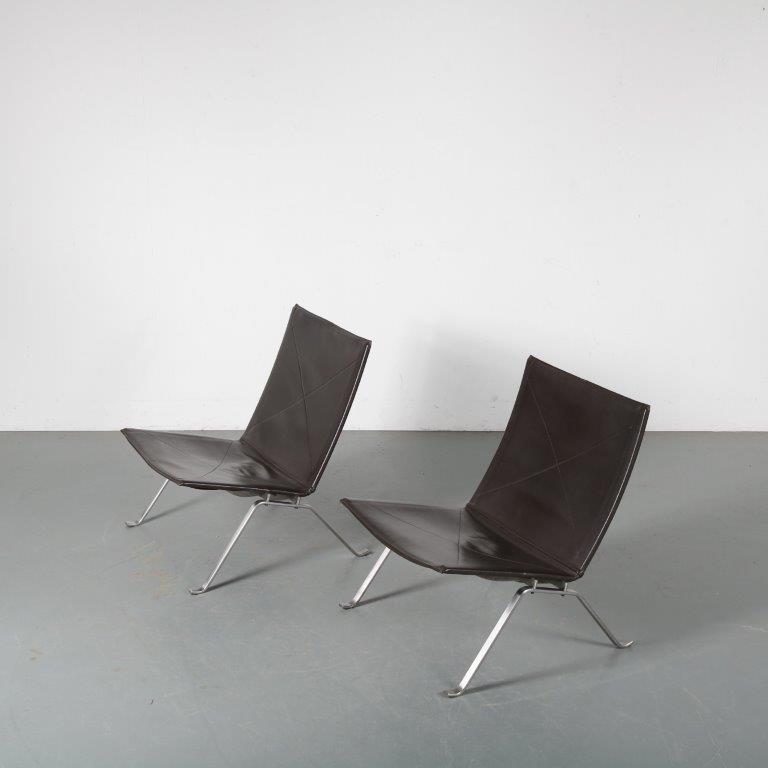 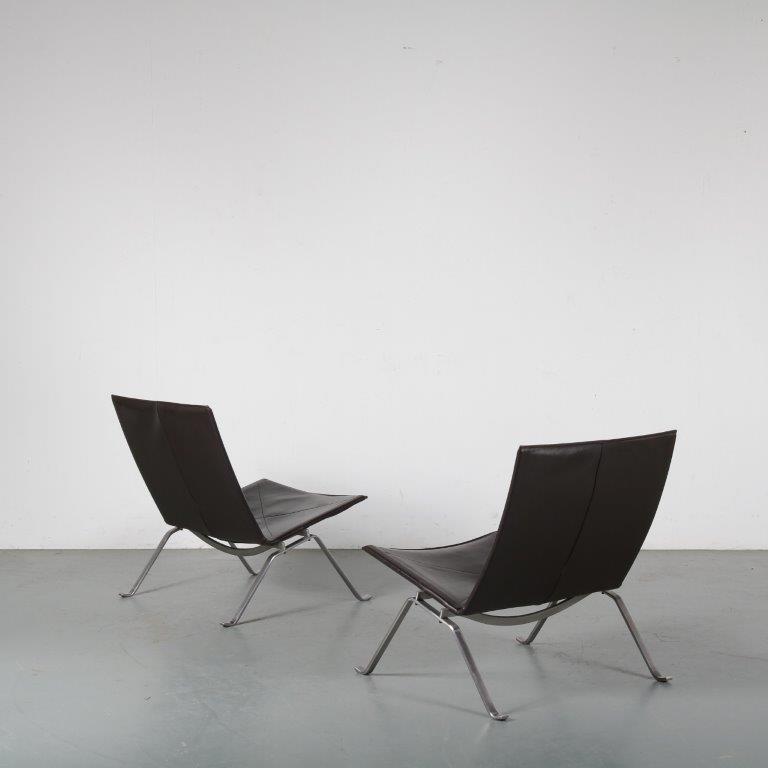 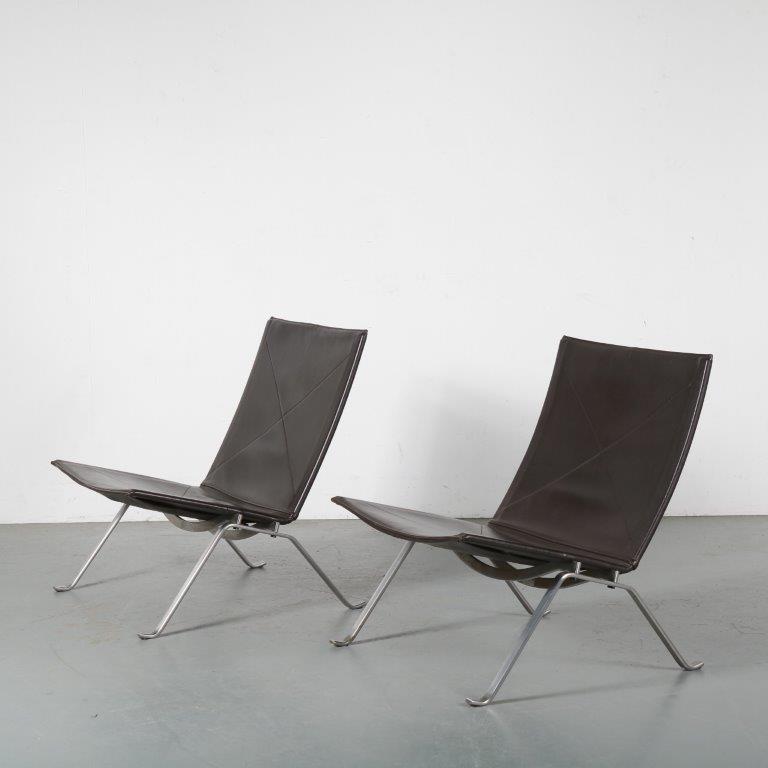 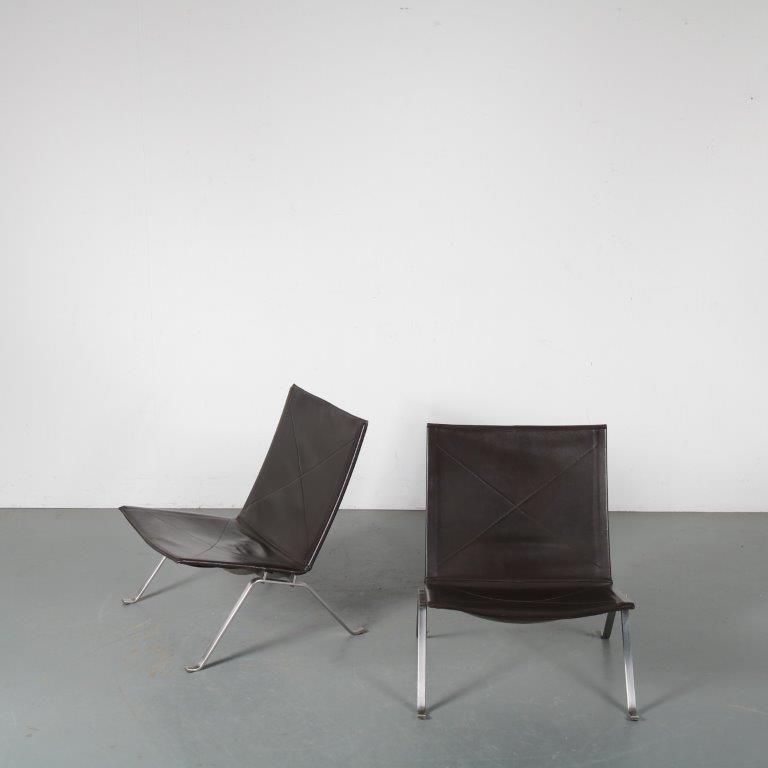 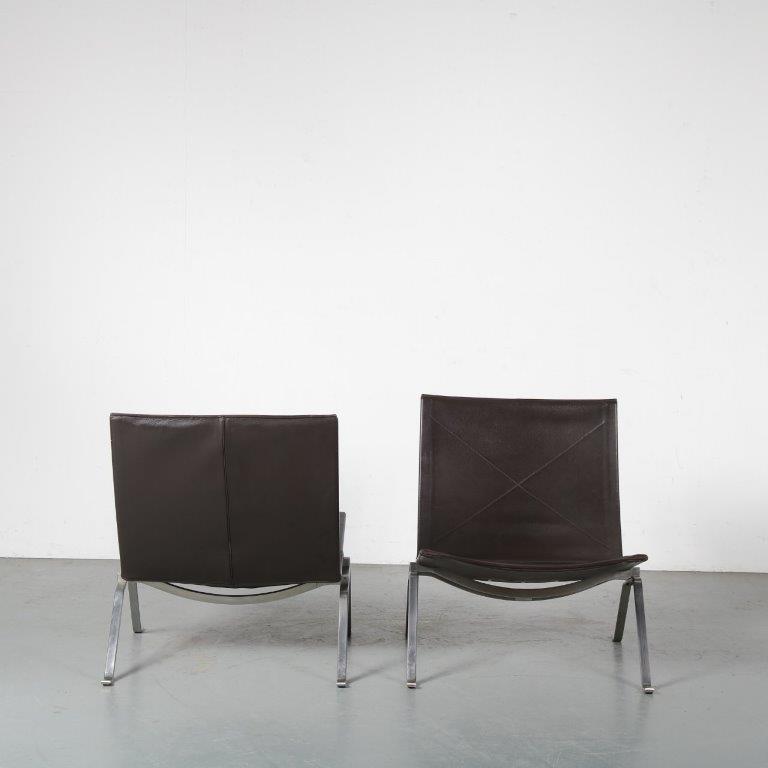 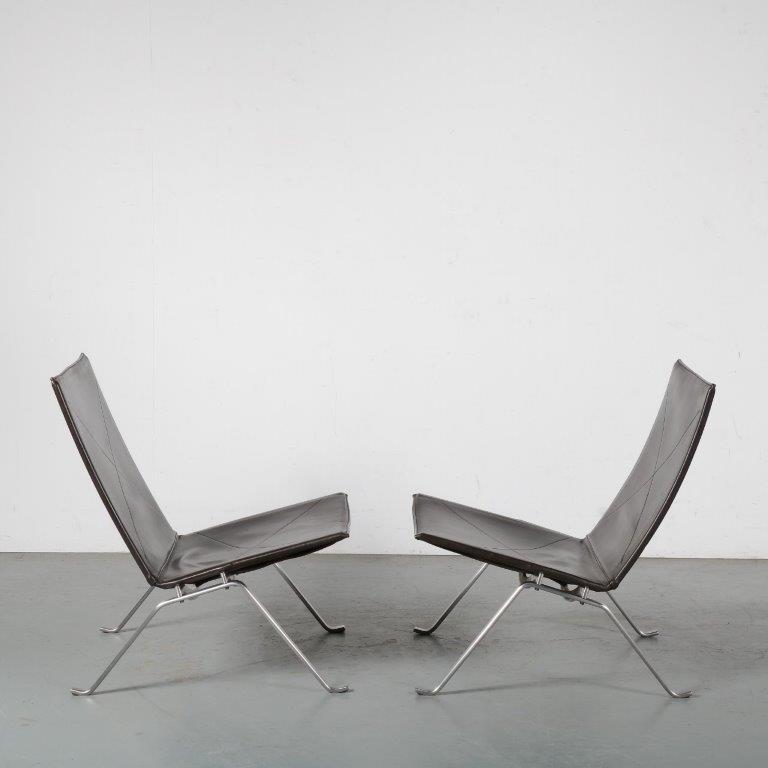 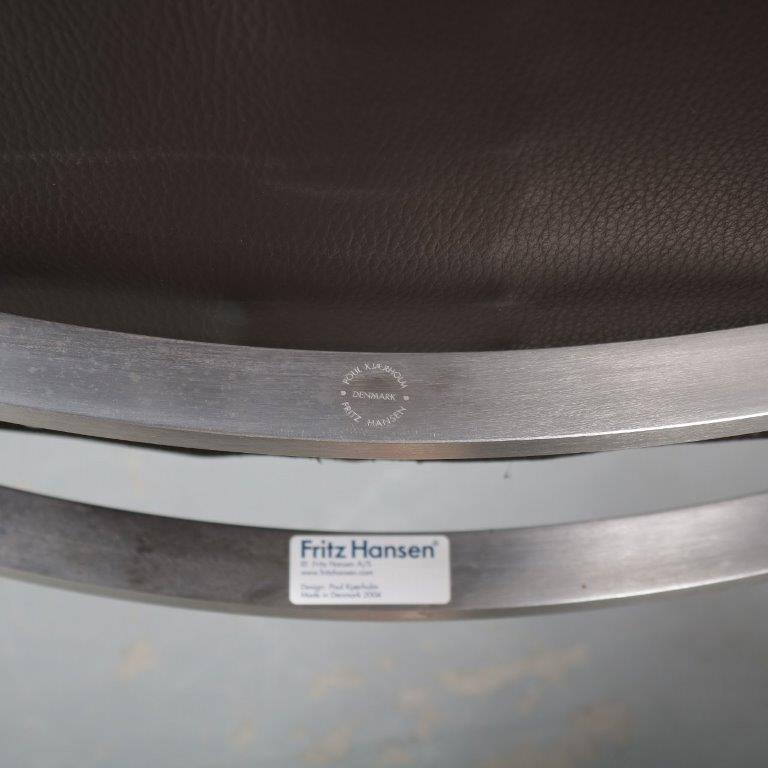 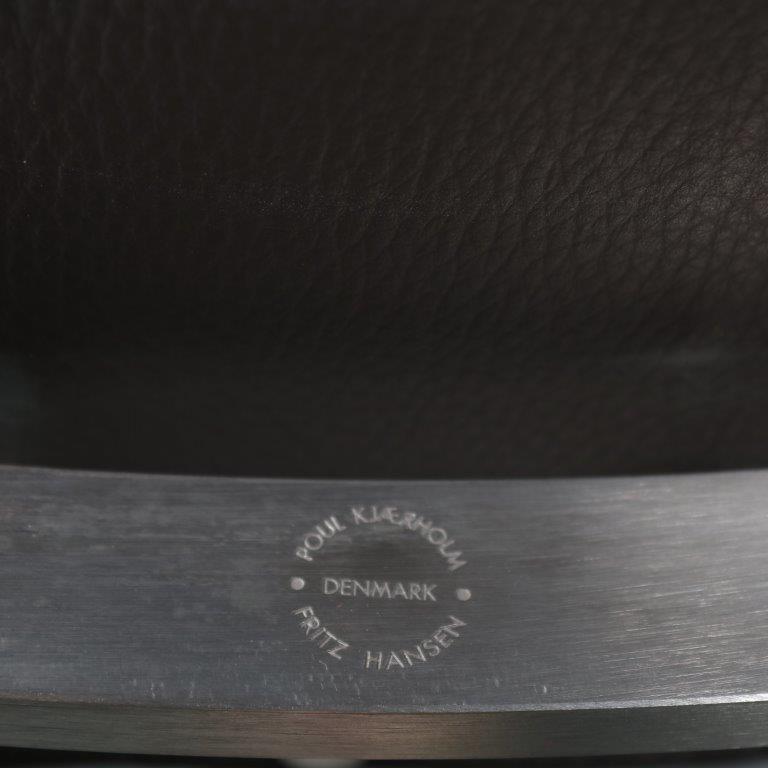 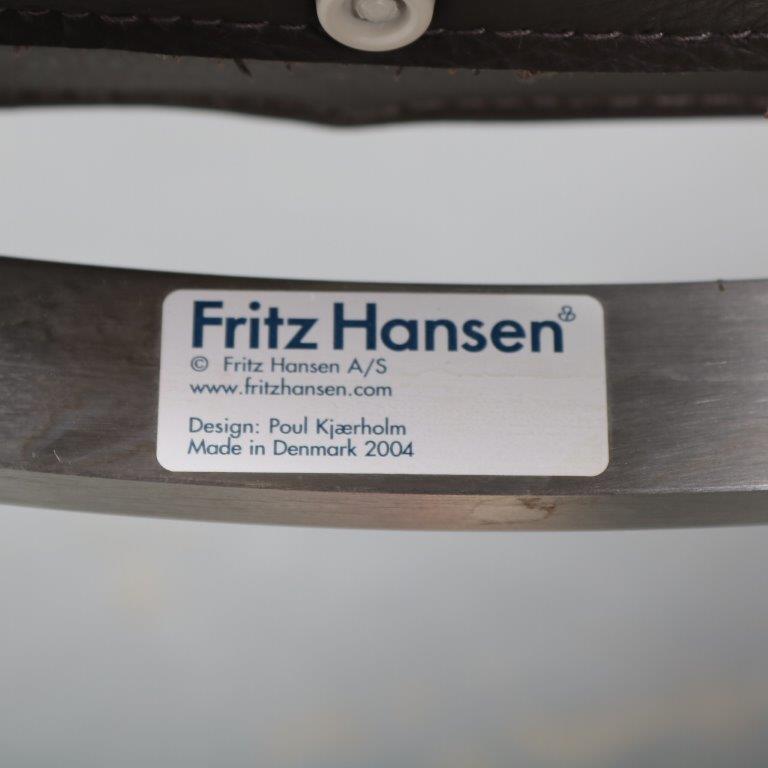 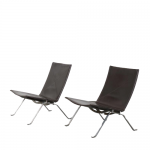 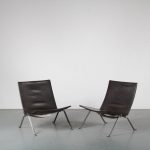 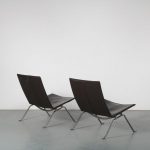 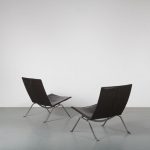 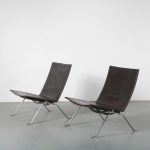 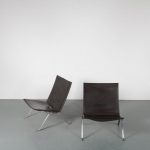 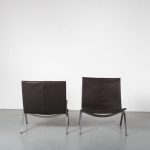 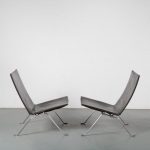 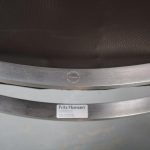 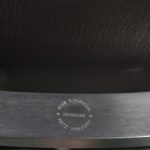 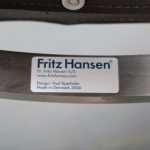 A unique pair of PK22 lounge chair, designed by Poul Kjaerholm, manufactured by Fritz Hansen in Denmark around 1960.

The chairs have a beautiful chrome-plated metal base. The seat is upholstered in high quality brown leather, creating a very nice contrast with the clean material of the frame. It is an impressive combination of warmth and luxury in design. The backwards leaning shape of the backrest make it exceptionally comfortable as well! The chairs even have the manufacturer’s label as well as the logo and maker carved into the frame, as shown in photos.

Sold as a set!

Poul Kjærholm (January 8, 1929–April 18, 1980) was a Danish designer.
Born in Øster Vra°, Denmark, Kjærholm began as a cabinetmaker’s apprentice with Gronbech in 1948, going on to the Danish School of Arts and Crafts in Copenhagen in 1952. In 1953, he married Hanne Kjærholm who became a successful architect. He was very articulate and with his natural authority he started an outstanding career as an educator in the same year (1952) but continued to study with Prof. Erik Herløw and Prof. Palle Suenson.
From the mid-1950s he worked for his friend Ejvind Kold Christiansen, an entrepreneur who, giving him tremendous artistic freedom, produced an extensive range of his furniture. His distinctive style is evident as early as 1952 in his PKO Minimalist plywood series. The PK61 coffee table of 1955 is a playfully irrational supporting frame visible through the glass top. In 1958 he attracted international acclaim for his contributions to the ‘Formes Scandinaves’ exhibition in Paris and the award of the legendary ‘Lunning Award’, the same year for his PK22 chair. In both 1957 and 1960 he won the Grand Prize at the Milan Trennali. In 1959 he became assistant at the Royal Danish Academy of fine Arts in Copenhagen and lecturer. In 1965 his PK24 chaise longue typified his mature style. Its simple flowing lines combine steel and woven cane. In 1967 he was awarded the Danish ID Prize for product design. He became head of the Institute for Design in 1973 and finally professor in 1976 until his death four years later.